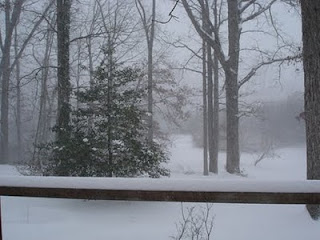 This much snow in Virginia is rare. I don't mind it for a day or two, but it's so cold snow may be on the ground for quite a while. The state didn't have much in the budget for snow removal, so VDOT may have used most of its funding for the late December storm. So far, no snow plows have come along.

The real icicles hanging outside our kitchen look identical to the ones I purchased for the season and have hanging in our entrance gallery. Amazing what they can do in China! We haven't had much snow the last few years, so I suppose we are due.
Posted by Notes Along the Way with Mary Montague Sikes at 8:33 AM No comments:

Angels over the Haitian Palace 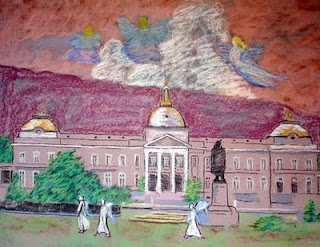 This has nothing to do with writing except that it relates to research in some small way. Soon after I heard about the devastating earthquake in Haiti, I remembered I had created a painting of the Haitian palace a few years ago. During a trip there a week before the February 5, 1986 overturn of the government, I took photographs of the palace, all the while wondering how such a magnificent structure existed amidst the dire poverty of the Haitian people.

When I pulled the pastel painting from the flat file drawer in my art closet, I was amazed to see the angels. I had forgotten the emotion I had felt at the contrast and the evil I believed existed in that palace--so much evil that I painted six angels to change the feel of that place. That the palace crumbled in the earthquake did not surprise me. I can only hope that with the current world focus on Haiti that all the evil will vanish and Haiti will join its Caribbean neighbors in prosperity.

And I wonder, from where did the angels come?
Posted by Notes Along the Way with Mary Montague Sikes at 9:19 AM No comments: