This morning, CBS Sunday Morning had a segment on Positive Thinking that I watched with great anticipation. What a disappointment!

The main conclusion one could draw from the presentation was that positive thinking may be bad for you. That was the view I gathered from comments made from several folks in the medical profession. What?!!

I believe in positive thinking. I know that if I get down and negative about things, I get sick. That's when I'm more likely to have colds and other ailments.

People with positive outlooks spread cheer. They seem to have an aura of brightness around them. That kind of aura promotes well-being. It is not negative to think positively. It is not a bad thing for one's health to believe he/she will get better. The mind has a great deal of power. I would like for CBS to revisit this issue with a more in depth investigation of the power of positive thinking.
Posted by Notes Along the Way with Mary Montague Sikes at 8:48 AM 10 comments:

I Have a Magic Wand

I have a magic wand. The way I obtained it is a magical story all by itself.

Two years ago, we visited Carmel-by-the-Sea on the coast of California. This is an enchanting, unique area with some of the most gorgeous scenery I've ever seen. While touring several of the shops that populate the lovely village, I decided to enter a small jewelry store, Robin's Jewelry. While in the shop, I spoke with a charming young woman who was creating some of the items for sale there. Then, all of a sudden, I realized it was getting close to sunset and I wanted to go into the nearby state park to photograph the setting sun amidst a spectacular background.

As I headed to the door, the young woman followed me. She said that she had something for me and then handed me a silver-colored wand formed from heavy aluminum wire. A swirl of pink and blue ribbons floated at the end. I was both surprised and delighted.

Even the glorious sunset of which I took dozens of pictures was no match for my gift of a magic wand. You see, I brought my wand back to Virginia and have used it in my art classroom ever since. My elementary school children love to close their eyes and make a wish before they leave my room. Touched by an amazing California magic wand, who knows how many special wishes have come true?

I wonder now how a stranger knew that I needed a magic wand. She surely has the kindness gene and has passed along an abundance of magic sprinkled over the heads of smiling little boys and girls a continent away.

Magic and dreams. I'm glad I have a magic wand.
Posted by Notes Along the Way with Mary Montague Sikes at 2:16 PM 3 comments:

The Kindness Gene - Do You Have It?

Yesterday, while watching the CBS Early Show, I heard about the kindness gene for the first time. The interviewer was discussing a study in which people appeared able to tell if someone had the gene or not. Apparently, in many cases they can.

Some people appear to be naturally kind; others, not so much. The teachers at our elementary school are  working hard to teach young children to be respectful and responsible. The students are learning to have good manners, and I often see them demonstrate acts of kindness for each other.

All of this has started me thinking about the importance of kindness in society. If everyone had the kindness gene, perhaps there would be no wars. Maybe if people possessed empathy, they would figure out ways to peacefully resolve their problems. Perhaps even members of Congress would be able to work together.

Obviously, everyone does not have the kindness gene. Do you?
Posted by Notes Along the Way with Mary Montague Sikes at 11:33 AM 6 comments:

These words show a picture. During my radio interview earlier this week with Neal Steele, on EXTRA 99.1, Neal read this sentence that begins one of the final chapters in my new book, Jungle Jeopardy.
I was pleased that he likes my writing, and his response started me thinking about the importance of visualization in writing.

As writers we struggle to use just the right words to allow the readers to see inside their own minds the images we are attempting to picture. We need for our readers to view the story in the vivid way we are trying so hard to reveal to them through our words. The artist is doing the same thing in a different way because, as artists, we are painting the picture to show our viewer a story.

I suppose that as writers and as artists we are stimulating the imaginations of our readers. As an art teacher, I love to encourage children to use their imaginations by closing their eyes and seeing images in their minds. After all, words that show are like paintings that tell.

The Jefferson Hotel - Breaking Out from the Coffee Table 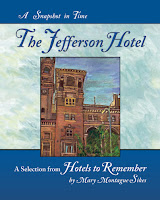 Several years ago I was thrilled to create a coffee table book, Hotels to Remember, that featured not only my writing but also my art and my photographs. Most of the photographs for this book were taken not with a book in mind but for the joy of recording a time and place we were visiting. Eventually, I realized that because I loved so many of the hotels I was documenting, perhaps I actually had a book.

When I pitched a romance novel I was writing to an agent at a conference, I also mentioned my idea for a "hotels" book. To my delight, the agent called back several weeks later and asked me to write the book that eventually became Hotels to Remember. I included my favorite hotels, most of them historic from many different locations, and highlighted each section with original paintings of the hotels. To make the book more interesting, I wrote articles about side trips associated with the areas. This book became not an ordinary travel manual but an art book. Eventually, we decided that the book might become too big if I used every hotel I wanted to include. Although I already had paintings, photos, and stories, I removed my Hawaiian destinations, a few Caribbean hotels, and several from the States. My intention was to create a second book, More Hotels to Remember. That book has not yet come to fruition.

Not long after publication of Hotels to Remember, I began to realize how quickly hotel properties can change. Before the ink was dry on my book, one of the hotels had expanded to double its original size. Another hotel had reconstructed its exterior, so the front entrance was gone, replaced by a restaurant. Others had switched from one hotel chain to another. I was upset.

Then, I came to realize that to be viable hotels must change. What I had written about them and the photographs I had taken were only a snapshot in time. But they were wonderful snapshots that depicted a special time and place.

You can imagine my excitement when a few months ago my publisher decided to take some of the hotels from my coffee table book and create the "Snapshot in Time" series. The Jefferson Hotel is the first of this series. A hard cover book focusing on only one hotel, this little book is perfect for libraries and gift shops.

My publisher describes these new books as break out books. For me, they are breaking out from the coffee table into a wider arena. I love the concept.
Posted by Notes Along the Way with Mary Montague Sikes at 3:07 PM 6 comments:

Magic in a Box

I'd forgotten how many wires crisscross beneath my desk as I write at my computer. Yesterday, I was amazed as I looked at the puzzle that stretched out beneath my feet. My husband patiently untangled each wire and handed them to me one by one to attach to the appropriate opening on my new computer. I was thankful he knew the meaning and purpose for each of those little wires with the pretty colors on the ends because I didn't have a clue.

I wonder how many writers are out there like me, setting up scenes, lost in the magic of story, yet completely unaware of how our computers work, how we string words together and place them in a file to retrieve again electronically whenever we need them.

The other day I watched a movie about  Virginia Wolfe and saw her writing her stories on paper with a pen that she dipped into a bottle of ink. Writing was so much harder then, I think. There was no magic locked in a little black box.

Perhaps though, the writer of that time had a far greater sense of accomplishment when he held the final product--a finished book--in his hand. It's much easier now to get published. There are so many writers out there that seldom is one writer unique.

Still, I am surprised, and pleased, when a perfect stranger walks up and is in awe of you, the writer.

As I look beneath my desk today, the maze of wires appears to have grown. I still don't know what they are. I only know there is magic inside the box that is my new computer. And I am glad!
Posted by Notes Along the Way with Mary Montague Sikes at 5:14 PM 3 comments: