Views from a Book Signing in Williamsburg VA

A book signing event at the William and Mary Barnes and Noble in Williamsburg VA on Saturday presented many learning experiences for this author. Because of the prime location in the heart of the historic colonial area, many people who enter the store are wearing Colonial Williamsburg neck lanyards.

Many of the people who spoke with me were from other states and visiting for three or four days. The first several people I talked with are no longer buying paperback books. One said she had traveled for many years in her job. Now that she has a Kindle, she loads it up with books. Another woman says she likes her Kindle because of the light that enables her to read at night. I gave these readers my card and noted that all of my books are available for Kindle and that most are also obtainable as Nook Books.

One lady visiting from Pennsylvania explained that she has a book coming out in several weeks. She's excited and had lots of questions about marketing.

A local author pulled out a copy of his self-published math book. He wanted my opinion of the cover. He also had questions about marketing. I asked him about social networking on Facebook and Twitter. He was unfamiliar with that route but expressed hope the company that published his book would help him with the marketing process.

When a man wearing an Indiana Jones hat and vest entered the store, I spoke to him and encouraged him to purchase my Indiana Jones-style adventure story, Jungle Jeopardy. I was delighted when he came back and got a copy.

During the four hours of my signing, I spoke with people from all over the country. Some had recently moved to Williamsburg. Others were weekend tourists. 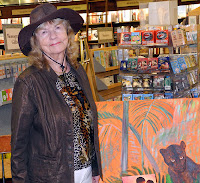 My free gift of a signed original art card with each book purchase attracted some buyers. I didn't wear my Indiana Jones outfit for this signing, but I might wear it next time.
Posted by Notes Along the Way with Mary Montague Sikes at 7:56 AM

Glad it was such a success!

Excellent info, Monti...interesting that people came to a BN but were talking about their KINDLES!!

Has Amazon's ebook reader become the "Kleenex" or "Xerox" of the book industry...??

Thanks, Billie, for commenting. I think Kindle has become the Kleenex of the book industry.

I'm going to figure out how to generate QR codes for my books and have cards at the ready with that info on them.

It's interesting that customers would enter a bookstore and then tell you they don't buy paperback books. (GRIN) Are they there for CDs, gifts, hardcover books (not likely, I'd imagine, but I could be wrong), or what? I have had people tell me they get either Kindle editions or mass market paperbacks, never trade paper, but that doesn't make sense to me, either, as the trade paper is nearly as sturdy as a hardcover. I just don't know why people in a bookstore would say they don't buy anything but Kindle editions--they can only get Nook editions in B&N or get paper editions. People are unpredictable.

I do understand why they want Kindle editions, and we can provide them--OTP does have Kindle editions. However, some books are not yet Kindleized and may never be, and some books I like to have as solid bricks of paper. It's good that we are versatile.

Great report, Monti. I'd like to know how to put the QR codes on cards too.

WOW... What a fun book signing! Sounds like you had a great time.

SO glad I popped in to share your experience.

Shalanna, thanks for commenting. This is the College of William and Mary Bookstore, so people come in for many things other than books, including lots of W and M T-shirts, jackets, etc. as well as textbooks.

Thanks for your visit, Marilyn. I'm going to figure out the QR code thing and post an update on it.

Thanks for your visit. I enjoyed this signing because the people were so interesting, they made chatting with them enjoyable!