In the Marketing for Romance Writers 52-week Blog Challenge, week eight is about the worst writing advice I've gotten. I started to think about all the submission rules romance writers got back when I first started writing in that genre. I followed them, others did not and met with great success.

We were told to never do multiple submissions to any of the houses. I knew people who did and were never harmed by it. Those writers said they didn't have time to wait around to get published.

Some writers didn't care that they had not finished a manuscript when they submitted their proposal. They didn't follow the rules of having it complete. Those writers often won.

Show, don't tell, the rule says. Some well-known authors tell a lot in their books and do just fine. Readers love them. They often hit the top of the best-seller lists.

Maybe the many rules are right for some people. Maybe they are good for special occasions. Maybe, but...

Here is my rule. Follow the rules that intuitively feel right for you. Use common sense. If age or illness places you near the end of your writing career, break all the rules in an effort to get your work out there. Do what works. Writing is hard. Go for the gold.
Create your own train and ride it to the top.
Posted by Notes Along the Way with Mary Montague Sikes at 2:40 PM 7 comments:

Email ThisBlogThis!Share to TwitterShare to FacebookShare to Pinterest
Labels: Blog Challenge for Marketing by Romance Writers, break the rules, Create your own train, follow the rules, Mary Montague Sikes

This is week seven of the 52-week blog challenge for Marketing for Romance Writers, and the topic is the top five items on my bucket list. Because I have cleared away many items over the years, I had to stop and think about this list. 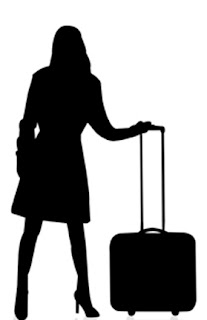 Going to the state of Alaska has to be at or near the top of my bucket list. After all, my husband and I have visited every state except Alaska. Years ago, I dreamed of flying to the West Coast and renting a vehicle to drive from Washington state up the coast of Canada to Alaska. It sounded like a wonderful adventure. That was the exuberance of youth speaking. Such a trip now sounds rather grueling and long. Also, Alaska is cold with short days most of the time. I am rethinking.

A trip to Australia was once at the top of my list. However, that sounds even more daunting now. When we flew for nine hours on a trip from St. Louis to Hawaii, that flight dampened my desire to fly double that time to get to Australia. And that did not even count the many hours to get from the East Coast to the West Coast to begin the trip.

I have now added to the top of the list the promotion of the "Passenger to Paradise" novels I started to write as a series in 2001. Those stories began with Hearts Across Forever, set on the luxurious tropical island of Jamaica.  There, I discovered Rose Hall Great House and the legend of the White Witch. Ideas blossomed in the lush setting and drummed up a magic drama and love story for the characters and for the "Passenger".


Posted by Notes Along the Way with Mary Montague Sikes at 9:56 AM 5 comments:

Five Authors I Would Like to Meet Would Include William Shakespeare

Much to my surprise, for week six of the 52-week blog challenge for Marketing for Romance Writers, I realized I would like to meet William Shakespeare. The fiction series, "Will", intrigued me and made me more interested in the back story behind Shakespeare's work. I wonder if any of the TV story lines are fact-based.

Ernest Hemingway is another author from the past I would like to meet. Key West is one of my favorite destinations, and I love visiting the Hemingway displays at the waterfront museum. I also enjoyed a visit to his home where I got to see the six-toed cats.

Of course, being almost from Richmond, Virginia, I treasure the words of Edgar Allen Poe. I especially love his poem, "Annabelle Lee", as well as most of his short stories.

As a member of Romance Writers of America, I attended every annual conference for many years and got to meet lots of authors. Once, in Chicago, I chatted with Janet Evanovich and was amazed to hear from her that she was leaving Love Swept and branching out on her own. You know where all of that went. She made the right move.

Ruth Montgomery's work has always intrigued me. I would love to meet her and discuss her paranormal writing.

So many wonderful authors. I would like to meet many others as well.
Posted by Notes Along the Way with Mary Montague Sikes at 1:33 PM 5 comments:

Book with the Biggest Influence on My Life - The Bible


Continuing with the blog fest for Marketing for Romance Writers, I thought for a long time about this week's subject, a book that has influenced me most. Despite all of my pondering and wanting to describe a book from modern literature, I kept coming back to the Bible.

Soon after I was born, my mother listed me on The Cradle Roll of the Fredericksburg (VA) Methodist Church. Mother was a very religious woman who often told me proudly that she had read the Bible from cover to cover by the time she was 13 years old. Over the years she made the church a big part of my life. As I write articles and books, words memorized from the Bible long ago still flow through my mind.

As an author, I have been influenced by the works of LaVyrle Spencer whose books, especially  Morning Glory, enchanted me. I loved Margaret Chittenden's reincarnation story, Forever Love, which encouraged me to write Hearts Across Forever. And then there were the beautifully-crafted novels by Diane Chamberlain. All of these books and their authors inspired me, but these stories did not follow me throughout my life as did the Bible.

The Bible versions from which I learned were dusty and old-fashioned, however, the messages prevailed. I hope never to forget those many memorized passages I found long ago. I hope to never forget the hymns that stir me and that special forever-memorable book.

Posted by Notes Along the Way with Mary Montague Sikes at 1:22 PM 6 comments: