Farewell to a Little Feral Cat

For the past two or three years, we have fed a feral black cat. I was first drawn to Fluffy Noir when I saw him with an injured, bleeding chest. Thinking it could be his last meal, I opened a can of tuna and left it for him.

He got better, and I started to see more of him. Whenever I had good leftovers, I put some outside for this little cat that always looked bedraggled and scruffy. Eventually we started to buy cat food to feed him. I discovered he liked pate best, especially the "super supper".

One day someone noticed that the cat (now named "Fluffy Noir") had patches of fur that were matted. Since he never got close enough for me to touch him, I could do nothing to help. She insisted that he should be trapped and taken to the vet to get neutered, inoculated, and his matted fur fixed. Although I did not like the idea of trapping him, I agreed, especially after being told that the matted fur was painful for an animal. A nice volunteer with a group working with the town's feral cat population came and set up a trap in our yard. After a few tries, Fluffy was trapped, and she took him away.

This lovely lady was an angel. She took Fluffy to the vet where his fur was shaved in the places it was badly matted. He got his shots, was neutered, and his flea problem was taken care of for about 30 days. The poor kitty looked awful, but he probably felt better than he ever had before in his lifetime. When the volunteer returned him to me the next day, Fluffy shot from the trap and raced the fastest I ever saw him run to a heavy thicket. I thought he would be upset with me for his ordeal, but I found him waiting for breakfast the next morning on our deck.

This little cat had no meow, but he would stop and listen when I talked to him. Although he still ran from me, he was letting me get closer at feeding time.

About two weeks ago, I found an eagle sitting on the deck railing opposite our back door. Since I had never before seen a raptor close to our house, I was fascinated. I even searched my Peterson's book of Virginia birds, but this raptor was not listed. Then I noticed Fluffy was tucked close to the brick wall, sitting on the other wooden rail.The bird was almost three times his size which made me a little uneasy. Until then, I had not thought about the cat, the smallest in the neighborhood, being in danger. When I started to open the door, the bird flew up into a nearby tree and lingered there for much of the day.

It has been over a week since I last saw Fluffy. I look out the windows in hope of seeing him in one of his usual spots, but I'm always disappointed. I'm afraid the eagle targeted him, and there was no way for me to save him from harm.

In my first novel, Hearts Across Forever, I allowed a cat to die. One of my readers told me she would never buy another of my books because of the cat's death. Now I understand why. I cannot use Fluffy's story in one of my books unless it is changed to "happily ever after".

Pets are special. Cats are extraordinary.

Do you have a memorable cat story?

Posted by Notes Along the Way with Mary Montague Sikes at 11:08 AM 4 comments:

Hotels Are But a "Snapshot in Time" 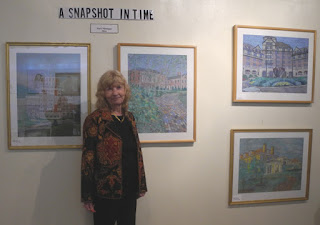 When I look out of my writing studio window, the yellow turning leaves capture my attention. They are the colors of autumn. A few years ago, I suspect the trees would be bare by now. With global warming, we have not yet had a frost.

Things change. And so did the hotels in my Hotels to Remember project. As I wrote, took photographs, and painted, I had no idea how quickly hotel facilities are renovated and transformed.

All the paintings in my Hotels to Remember coffee table book were created using a favorite material of mine, soft pastels. A few years ago while we were visiting famous and historic old hotels, I began to paint images of the rough and weathered facades of some and the shiny jeweled surfaces of others. I loved watching the paintings grow on the tinted Canson pastel papers. As I became more involved in the project, I realized I had far too many hotels to include in just one book.

The Royal Hawaiian "Pink Lady" was cast aside. So was the Princeville hotel in Kauai. I took out La Samanna in St. Martin, SuperClubs resorts in Jamaica, Orient Express hotels in New Orleans and in Charleston, South Carolina. There wasn't room for them in my book, so I put aside photographs and slides I had taken on site and stored them in a large box in my writing studio. I placed the pastels I had already painted in my flat files storage unit in the painting studio closet. I would come back to them soon, I assured myself as I added even more material from Sainte-Anne-de-Beaupre in Quebec to my stash.

Then I realized it was probably too late to start work on More Hotels to Remember. After all, when you are dealing with the hotel industry, things change quickly. Renovations take place. Buildings are altered with entrances shifting, properties doubling in size and much more.

Only the side trips remain the same and the locations. You don't transform the Grand Canyon when the El Tovar seated on its edge is upgraded. The charming little town of Harper's Ferry, West Virginia does not vanish when the Hilltop House Hotel closes. The St. Louis Union Station remains the same even though the hotel property switches hands.

Each hotel in my book is actually a "Snapshot in Time". A wise writer pointed out that fact to me. My publisher was quick to pick up on the premise and created "Snapshot in Time" books for a few of the hotels in the Hotels to Remember project. I added some new materials for the side trips, and realized that even closed hotels are a part of history.

Many of my "Snapshot in Time" paintings are now on view at Dara LeBlanc-Haynes' Mathews Country Galleria on Brickbat Road in Mathews, Virginia. The gallery is open now on Thursday, Friday, and Saturday from 10 a.m. to 4 p.m.

Posted by Notes Along the Way with Mary Montague Sikes at 10:06 AM 2 comments: