Artful Angels - A Book for These Times 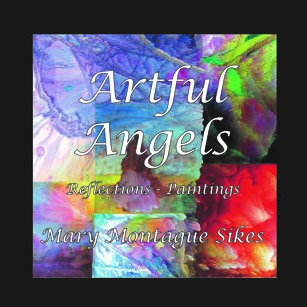 I have always loved angels. In my art, I see them everywhere.

Artful Angels is my book for these troubled times. The paintings in it were created using a variety of materials, including pastels, acrylics, encaustics, and watercolors mostly on my favorite surface, Yupo.

Meditation is important to me. The words--perhaps they are poetry--came intuitively as I studied each painting.

It is my hope that readers will select a painting or a poem and reflect on it, creating their own thoughts and images. Quiet is a good thing. It can bring joy to our hearts and angels into our lives.

Artful Angels in hardcover is available now from Barnes & Noble. It will be available soon from Amazon.com. Please find your own retreat in this beautiful book. I would love to know what you think.
Posted by Notes Along the Way with Mary Montague Sikes at 9:43 AM 2 comments:

A Story for the Times of a Writer

A young woman opened the door to enter the County Board of Supervisors' meeting. Thick smoke swirled like a cloud around her face. She stifled a cough, then clutched her secretarial pad and pen close to her chest. Quietly she made her way through the crowd of men to the straight wooden chairs at the front of the room, reserved for the press.

When she sat down, the Daily Press reporter welcomed her with a smile like he always did, and the Times-Dispatcher scowled as usual. Both men pulled out their packs of cigarettes and soon added to the haze in the room.

That's the way it was back then. The young woman wrote for the afternoon city newspaper. The two men were reporters for morning papers in two different cities. All three of them were competitors, seeking to beat out the others in some unexpected way.

By the time she drove home at the end of the meeting, the young woman, her clothing saturated in smoke, would be past the paper's evening deadline. She would write her story that night and call it in from her wall telephone the next morning. Someone on the city staff, a stranger to her, would take the dictation. If she took photos, she would drop her film by the home of a friend who worked in the city, then she would head to her day job in the next county. It was a brutal schedule for the mother of three young children.

She wrote lots of feature stories and took the photographs, but that was at a more leisurely pace. Those stories were typed, and they, along with the undeveloped film, were mailed to the paper. The pay was not much, but the experience was priceless for the young woman.

Along came computers, digital cameras, cell phones and everything changed. Afternoon newspapers closed down. People were a little different, not so much relating to one another at the meetings. Reporters died. The smoke was gone.

The young woman grew old, but, because of the newspapers, she had learned to write and to photograph many subjects. Those were the times.
Posted by Notes Along the Way with Mary Montague Sikes at 12:01 PM 3 comments: