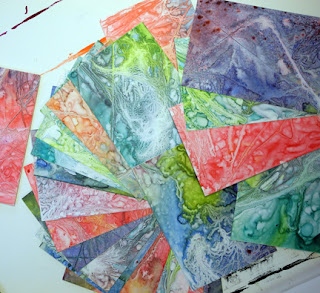 About six years ago, I created a series of long narrow paintings, using intense Robert Doak watercolors on heavy weight Yupo. I then cut the paintings into 4" x 6" cards and put them in a plastic envelope.

That summer, our annual national parks trip was a week-long excursion to Shenandoah National Park. Since the destination was only a few hours away, we drove our car and I had plenty of space to carry what I wanted which included my new cards.

At night, I would spread my little paintings on a sofa in the spacious Massanutten condo we were renting. The images on the cards "spoke" to me in magical ways. I made up names for many of them, and poetry came for each image I named. The graceful swirls of paint revealed hidden secrets and angelic hideaways.

These cards had potential. The touch of them led me into a world of dreams and idealistic thoughts.

This is one of the starlit verses that came to me as I listened to the sounds and the memories of the mountains in old Shenandoah.

The forever stars gleam down on us

And I see a magic rug appear.

And messages flash in starlight.

When we left the park, I zipped the colorful little images up in their bag and put them away until April of this year when I pulled them out to show my publisher. The cards are enchanted, I thought, but I didn't tell her that. Perhaps she discovered their magic for herself when she created a captivating design for many of them 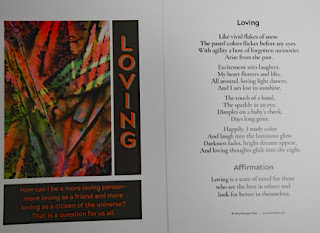 We have a group of 10 cards now that are formatted as special cards for meditation or affirmation. Some of them are available at Crossroads Art Center in Richmond, at A Touch of Earth in Williamsburg, and at Gloucester Arts on Main in Gloucester.

Who knows where these cards will show up next? Perhaps in a box for meditation. They have taken on a life of their own, seeking their own place in the sun.

Posted by Notes Along the Way with Mary Montague Sikes at 3:21 PM No comments: