Angel Paintings for the Christmas Holidays

For many years, I have crafted an angel painting to use as the image for our Christmas card. The tradition actually started when our oldest daughters were small, about three and six. I created a woodcut block of them as angels. Over the years, I have used that woodcut many times as a demonstration piece in art classes for ways to make art prints.

In more recent times, my angel paintings have been pastels, watercolors, or acrylics, sometimes on paper, other times on canvas. The watercolors are softer and more subdued paintings. The acrylics are quite vibrant. All of them are far different from the prints I created from that earkt woodblock.

Each year, I like my latest painting best of all. This year is no exception. Last year's canvas was quite abstract. This year, my painting is a little of both realistic and abstract. The acrylic painting began with a buildup of gesso that I textured using a variety of methods and materials. I then used Golden Fluid Acrylics to create the finished painting on a square 24" x 24" gallery-wrapped canvas that I titled "Angel at the Window".

Is she looking in or looking out? What do you think?


Merry Christmas
Posted by Notes Along the Way with Mary Montague Sikes at 9:53 AM 6 comments:

"Of all God's creatures there is only one that cannot be made the slave of the lash. That one is the cat. If man could be crossed with the cat it would improve man, but it would deteriorate the cat."

I have to love that quote by Mark Twain. Cats are the most amazing creatures, and writers seem to adore them. Think about the six-toed cats that still live in Ernest Hemingway's house in Key West FL.

"A cat has absolute emotional honesty: human beings, for one reason or another, may hide their feelings, but a cat does not,” according to Hemingway.

One of my favorite authors, Edgar Allen Poe, said, “I wish I could write as mysterious as a cat.”


And Jules Verne wrote, “I believe cats to be spirits come to earth. A cat, I am sure, could walk on a cloud without coming through.”

Cats are surely most mysterious creatures. Perhaps they are spirits come to earth as Verne observed.

Over the years I have rescued many cats. Once, as a child, I saved a litter of four adorable newborn kittens drowning in a thunderstorm. Although we never brought the cats into the house, we fed them outside for as long as I remember. Smokey became my favorite and met me each day when I came home from school for lunch. I was devastated when he was struck by a car and killed.

They all have unique personalities and can surely inspire writers. We have a feral cat that lives in our yard, and, although I feed him, he will never let me near him. Fluffy Noir is long-haired and scraggly because no one can get near enough to comb his hair. The first time I saw him was the day he showed up on our deck with a torn and bleeding chest. I felt sorry for him and opened a can of tuna fish, sure it would be his last meal. It wasn't. I couldn't let him go hungry, so I continued to feed him. He now strides about with confidence but still allows no one to come near him. Strangely, he never makes a sound. He is the first cat I've known without a meow.

Cats are the perfect creatures for writers. They give all of us a lot about which to write. They are independent and beyond domination. I think Mark Twain was right in his observation. Crossing man and cat would harm cat, not man.

I once let a cat die in a story I wrote about Jamaica and Obeah. I lost readers because of it and will never make that mistake again.

The Carl Sandburg poem about "Fog" gives a vision about the presence of cats:
The fog comes
on little cat feet.


It sits looking
over harbor and city
on silent haunches
and then moves on.
How perfect is that?

Posted by Notes Along the Way with Mary Montague Sikes at 4:57 PM 5 comments:

Art and Writing, Writing and Art

Art and writing. Writing and art. For many years, I've looked for ways to combine the two.

My most recent attempt was to allow artist Ferrah Ferand, the heroine of Evening of the Dragonfly, the opportunity to actually paint the exhibition she creates in the book. Over the past few months, I've had several showings of the work that were accompanied by book signings. I'm not sure how much help the art shows have been, but in one case the paintings were a major hit.

During the two days after Thanksgiving, when my work was part of the Mathews Bay School Holiday Open House, I told many passersby about the meaning of the show. They listened politely, and some asked questions. However, not many book sales resulted from Farrah's Art. 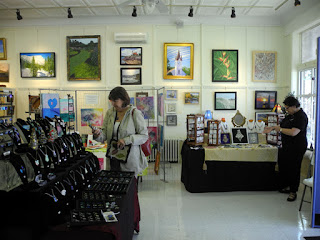 I enjoyed talking to the visitors, most of whom were participating in an Artists Studio Open House which allowed the touring of about seven different art studios located inside or near private homes in the area. The weather was nice both days, and the people entering the gallery were appreciative of the opportunity to see so much original art. They were also quite interested in the jewelry displays located inside the Bay School Gallery.

Writing and art. My next project will involve writing statements about various pieces of art I have produced for sale. You would think that would be quite simple for a writer who is also an artist. It isn't, but still I am looking forward to doing this. What is my inspiration? What is the story for this piece?
Posted by Notes Along the Way with Mary Montague Sikes at 1:58 PM 5 comments: