"Passenger to Paradise" - the Second Book is Set in Sedona


After Jamaica, the journeys of the "Passenger to Paradise" continued. She visited Sedona and fell in love with everything about the picturesque terrain of red rock formations against glorious skies. She remembered the same scenery from the old western movies that brightened her weekends long ago, so she enjoyed seeing them even more.

During that initial trip to Sedona, she took a pastel workshop the first week and then grew enchanted with vortexes and meditation wheels. These elements eventually help form the second "Passenger to Paradise" book, Eagle Rising. As with Hearts Across Forever, a touch of the paranormal creeps into her dreams, and she goes on a journey into the spiritual lands of the Indians.

Unable to shake the horror of her fiance's death, Rachael Barker draws the concern of her kindly boss at the Observer Times. Perhaps, he thinks, an assignment in the exotic desert community of Sedona, AZ, might shake Rachael's malaise, so he sends her to cover the enigmatic New Age guru, Arch Adamson at his Earth Awareness seminar. Unnerving things begin happening before Rachael can interview her subject...she meets Derek Ryder, a man with an obvious secret in his past, but is further shaken by her experiences in the mystical desert where an Indian warns her to leave their hallowed ground undisturbed. As Derek and Rachael search for answers, a new question presents itself: Can they overcome their wounds?
Posted by Notes Along the Way with Mary Montague Sikes at 12:00 AM 3 comments: 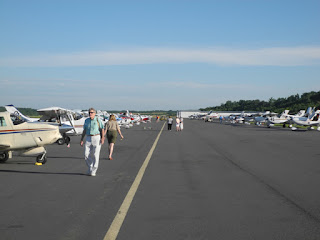 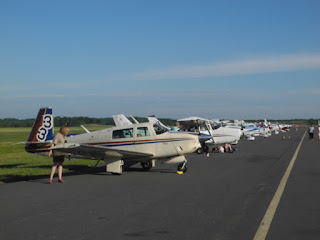 More than 50 airplanes lined the taxiways of the Stafford Regional Airport, located a few miles across the Rappahannock River from the historic City of Fredericksburg VA. At the start of the 39th annual Air Race Classic on Monday, June 22, the paved areas and the Terminal Building bubbled with excitement . A group of young girls from Alabama, along with their adult leaders, watched with enthusiastic interest as each plane took off. Some of them dreamed of one day flying in this race. 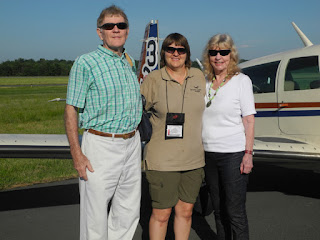 My husband and I were among the spectators. Because I was born in the old Mary Washington Hospital near the edge of the Rappahannock in Fredericksburg and because I spent my early years exploring the town, I was especially excited that our adventurous daughter, Alicia, was part of the race that started nearby. After all the planes took off, we decided to go to Fredericksburg and visit some of the places I remember from long ago.

We strolled along Caroline Street and peered through windows of the many antique shops that were not yet open. The Griffin, a bookstore where I've had several book signings and even an art show once, featured signs for its "retirement sale". Sad, but that's the way it is in the world of books. Sammy T's where we've dined in the past was not yet open for the day. We looked at the menu posted near the door and went on to the Visitors Center to learn about area art galleries. Because it was Monday, none of them were open that day. Next, we ambled down a side street to Sophia Street that edges the muddy Rappahannock.

Everything is old in that part of Fredericksburg. We paused at the back of the old Lafayette School that when I attended still had floors stained with blood from usage as a hospital during the Civil War. It's now a library, and I wondered what the floors are like. As a first grader, I walked 12 blocks from our home located in the block next to the entrance gate to Mary Washington College (now the University of Mary Washington). Sunken Road where thousands of soldiers died during that war is the street by the college. Along the way to school, I walked past the Confederate Cemetery and Kenmore, famous from Revolutionary War times. My mother loved Kenmore, and I went with her when she served tea to visitors during Garden Week. We drove past the house I lived on Franklin Street. It was like I remembered it but smaller. The house next door looked the same, but the street itself appeared much narrower with houses closer than I remembered from the eyes of a child.

Since none of the restaurants on Caroline Street were open during mid-morning hours, we went into Goolrick's Pharmacy and ordered drinks and salads. A sign said the business has been in operation since 1867. The chrome and red stools along the counter brought back memories of childhood days when I ordered ice cream cones there and sat on similar seats.

Memories from my childhood were both sad and wonderful. I loved my friends and remember now that most were children of college professors. How depressing it was for me when my family moved away, and I had to leave them and the comfort zone of my hometown.

Posted by Notes Along the Way with Mary Montague Sikes at 9:58 AM 6 comments:

"Passenger to Paradise" - the Art Show 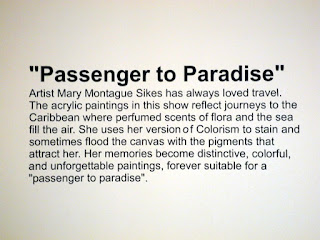 All the while the "Passenger to Paradise" books were in process, a series of paintings was being developed as well. Many of those paintings are currently on view at The Ward Center for Contemporary Art in Petersburg, Virginia. The Grand Opening reception and ribbon-cutting for the new facility took place last Friday night.

Some of the paintings were inspired by scenes in Jamaica, the setting for Hearts Across Forever. Others were created from photos taken as a hurricane moved toward the shores of an island in the Bahamas. Visits to St. Martin, Barbados, Trinidad, and Sedona, Arizona were the motivation for other paintings in the series.

Seeing a series of these paintings hanging on the walls of The Ward's beautiful new gallery space brings back many memories. It's fun to be a "Passenger to Paradise" and encounter lovely spaces in our too often traumatic world.

Thank you, The Ward Center for Contemporary Art, for bringing new spaces for artists and art. Make art, not war. That would be a beautiful thing and offer many new journeys for all "Passengers to Paradise".

Posted by Notes Along the Way with Mary Montague Sikes at 9:44 AM 7 comments:

She is a dreamer, a creator, and a traveler who began her wanderlust years ago. As a child, she never traveled many miles from home, but instead gathered books all around her and through them journeyed far and wide by horseback, bus, and train. She climbed mountains tall and treacherous. She rode camels over hot desert sands in search of an oasis.

When a love of movies captivated her father, she went with him to see every new picture that came to the small theatre a few blocks away. Her first sightings of the Red Rocks of  Sedona AZ came during Saturday matinee viewings of old cowboy movies.

Eventually, she got to travel on her own. Imagine her excitement when she boarded a flight with her husband and headed to Montego Bay, Jamaica. The perfect temperature, perfumed air, hibiscus, and bougainvillea enchanted her and drew her back again and again to the lush tropical island.

On that first visit to Jamaica, she discovered Rose Hall Great House, and the story of Kathryn Calder was born. Hearts Across Forever is the first of the "Passenger to Paradise" books.

From the moment Kathryn was assigned to a job in Ocho Rios, her world was sent into a spin. She had unusual dreams that upset her, and she developed an urgency to visit Rose Hall. Although she fell in love with the beautiful island and an handsome stranger who seemed to be no stranger at all, Kathryn was faced with confusion centering on the mysterious and beguiling old plantation and her connection with the past. Kathryn soon discovered that her return to Jamaica was as inevitable as that of the "Passenger to Paradise" who still longs each winter to revisit Ocho Rios, Montego Bay, and Negril to stir up old memories.

Besides her book series, the "Passenger to Paradise" also has an art show currently on view at the Ward Center for Contemporary Art in Petersburg VA. The Grand Opening is this Friday evening, 6 to 9 p.m. All of the paintings in the exhibition are based on travels to Jamaica, the Bahamas, Trinidad, Barbados, and St. Martin.
Posted by Notes Along the Way with Mary Montague Sikes at 1:23 PM 4 comments:

Believe in Your Dreams

Beneath the monitor of my computer, I have a motto card with two angels on a glittery, sparkly lavender background. The message reads, "Believe in your Dreams!"

Sometimes I wonder about dreams. I had many as a child and teenager growing up. One of my dreams was to become a journalist. I also sometimes wished I were a boy and could grow up to be a baseball player in the "Big Leagues".

But more than anything, I longed to travel. Books set in Egypt in ancient times intrigued me. I recall a second or third grade book called, Stories Near and Far. I read and reread every one of those little stories with their exotic settings.I got lost in books. I dreamed of becoming Nancy Drew. I didn't. But I did become a freelance journalist and got the opportunity to cover meetings and events of all types. I wrote hundreds of published feature articles and took thousands of photographs to go with them.

Travel still captured my imagination. As we visited the Caribbean, Europe, and beautiful locations in our own country, I took copious notes and hundreds of photographs. Travel articles and painting series resulted. Dreams became reality. Eventually, they grew into books, both fiction and non-fiction.

In the next few weeks, I'm going to write about some of the dreams that became books and some that became paintings. It will be a learning series.

Do you believe in your dreams? Along what kinds of journeys have your dreams led you?


Posted by Notes Along the Way with Mary Montague Sikes at 9:16 AM 3 comments: