When we landed in Key West, Florida last week, the first thing I noticed was the difference in the light there. The water, foliage, and even the animals have a very Caribbean appearance. The water and clouds reminded me of my Media General painting that sold at auction earlier this month. That painting was based on photographs I took while visiting islands in the lower Caribbean.

I also was amazed once again by the life-size pieces of sculpture on the roof that greet arriving visitors to the Conch Republic. I wonder, but didn't ask, if they, too, are by the prolific artist, Seward Johnson, who entertains tourists with his delightful creations on view outside the Art Museum by the docks. He has changed the one in front of the building and now has the sailor kissing the nurse after the WWII popular photograph. An earlier one at that location was of dancers from a different period of history.

Seeing the Johnson sculptural renderings makes a visit the Key West worthwhile. I didn't go inside the Art Museum this time. However, I will never forget "The Boating Party" that Johnson fashioned after the famous Renoir painting.
His fantastic sculpture was on view at the museum several years ago. It was a perfect example of light, love, and sculpture.
Posted by Notes Along the Way with Mary Montague Sikes at 11:02 AM 4 comments:

When Collections Are Auctioned

A few days ago, I learned that the Media General Art Collection was being auctioned off. That fact denotes another sad "changing of the times".

I was proud to have one of my pastel paintings, "Blue Seas", in their collection. According to the auction house documentation, Media General purchased my painting in 2001. I don't recall from what gallery they got it. It was one of 369 pieces of art in the auction that ended this morning.

Media General owned the Richmond Times-Dispatch that operated out of a building in downtown Richmond, Virginia for years. That same building was once also the home of the Richmond News Leader, the afternoon newspaper for which I served as a correspondent and wrote many feature articles and news stories for nine years.

We were in competition with the Times-Dispatch, so I spent many hours on deadline, on the telephone, and learning lots about being a good news reporter. I worked with John Gunn, an outstanding and very professional editor who made certain that every fact was checked for accuracy. That was a wonderful and valuable experience that helped develop my writing career.

When Media General purchased my painting for their newspaper building, it was especially meaningful to me. The printing presses were long-gone, but the reporters were still there.

Things change. Newspapers vanish. Art moves on. Because it is an auction, the new owner is only a number.

Times change.
Posted by Notes Along the Way with Mary Montague Sikes at 10:38 AM 5 comments:

Prompting the Writer and Artist - #Blogging A to Z Challenge 2017

Often the writer needs prompts to get started. So does the artist. That's why I appreciate the A to Z Challenge. This year was no different because the Challenge got me to create poems for 26, mostly small, watercolor paintings. The poetry made me think, and for that I am always grateful. 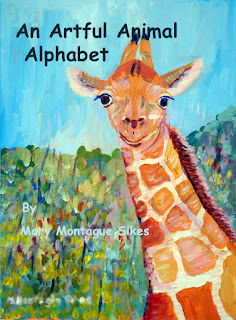 Past Challenges have sparked new projects, especially the one several years ago when I painted animal images with acrylics on canvas each day. Thanks to Mike Orenduff, my new publisher, for making my new book possible. An Artful Animal Alphabet is a children's book, but it's really for people of all ages. Except for one, the animal images were all created in my Challenge project.

Because of prompting and promotion by people I have never met in person, my latest book will soon become a reality. The Challenge has sparked other ideas, so new projects might await in the future.

I appreciate all the wonderful creative people I have met because of the Internet and also because of the A to Z Blogging Challenge. Thanks to all who have made the Challenge and creative connection possible.

Posted by Notes Along the Way with Mary Montague Sikes at 8:05 AM 7 comments: