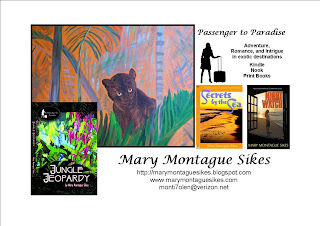 Marketing for Romance Writers has a 52-week blog writing challenge, and I've decided to join. The first week is "What is your favorite piece of writing and why?"

Jungle Jeopardy, my Indiana Jones kind of novel, has to be the most exciting, fun piece of writing I've ever done. It starts on the island of Antigua where my heroine lives, then heads to Costa Rica and goes up to Nicaragua, Honduras, and Guatemala.

Our first trip to Antigua a few years ago was the real inspiration for this book. It all began with a visit to the director of the history museum on the island. He shared so much with me that I was immediately hooked on writing a book that would include some of the things I learned.

Secrets by the Sea was my first book with Antigua as the setting, but it didn't tell the whole story so I wrote Jungle Jeopardy. Billy, the jaguar, became a character in that book. If you love animals, casting an animal in an important role in the story will intrigue you.

Costa Rica is the only one of the four Central American countries we have visited, but I had developed strong interest in the Mayan Ruins of Mexico. I pulled that knowledge into my new story that I set in the jungle. The fictitious ruins in my book rely a lot on what I learned while visiting the Mayan sites at Palenque, Chichen Itza, and Cozumel. I had already created a series of large Mayan Ruins paintings, so writing a story that included ruins was a perfect follow-up.

In my imagination, I see Jungle Jeopardy as a magical movie. It is a true adventure story and romance with an actor who is a young version of Harrison Ford. Who might that be?


Posted by Notes Along the Way with Mary Montague Sikes at 9:36 AM

I hope you do get to see it as a movie one day!

It's an Indiana Jones kind of novel? That's a great comparison that gives a strong impression of the book.

Love the concept of Jungle Jeopardy. I've never been to the Caribbean or Central America, but when I was in college, I went on a tour of the Astec and Mayan ruins, including Palenque and Chichen Itza. It's fascinating. I'm sure the book would be a great movie!

I would love to see some of those places someday. I have been to Cozumel though! But I'm sure you have seen some of the more genuine and fascinating places there.

Your enthusiasm shows! Thanks for sharing!